before she reads, she shares with her audience a bit of writer's advice. what makes it golden is that what she shares is really advice for people, everywhere. she says:

"you don't always have to face the blank page; you can start with something already written."
for us writers, who often struggle with the frequently daunting task of beginning a piece, with finding the best way to articulate that exciting idea in our brains, this is good news. but for people, and activists in particular, this might be even better news to zero in on. for the world we're trying to create, for the change we envision and seek to manifest, we don't have to start from scratch. though humans are still 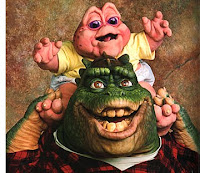 relatively young in this world, we have a rich history to draw from!

we can build on the work that's already been done, build on the long trajectory history has offered us of people committed to liberation. in that way, writers and activists, and people of all persuasions can get the strength we need to do the important work we're invested in doing from already existing sources.

viva the wheel! and not reinventing it!

a traveling man, moving through spaces. 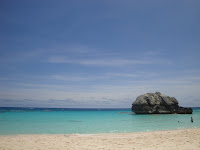 june has graciously carried me to new locations both physical and intellectual. i was fortunate enough to be able to spend a week in bermuda at the home of a friend of a friend. while there, i gained much insight about the country's history--of slavery, of colonialism, of tourism, of change and status quo. i played scrabble. i slept late and lovely. i beach-bummed and sun-funned. i also read a lot.

one of the books, consequence: beyond resisting rape by loolwa khazzoom, managed to shift my already radical perspective on the urgency around violence against women. khazzoom discussed the relationship between street harassment, gender violence, and law enforcement. she assesses that relationship as one in which the state--and more specifically the legal system--systematically fails to adequately and appropriately punish street harassment against women, and accurately link street harassment to gender violence. in response to that intentional absence of protection and deterrence, khazzoom suggests that women begin to create consequences for the men who harass us. some are physical consequences (self-defense, and what i'll term proactive self-defense--responding physically to an aggressive verbal threat), and some are social, but all of her ideas (packed snugly inside personal anecdotes) served to begin a conversation on shifting away from a dangerous norm towards women's safety, autonomy, and self-determination.

shortly after returning from bermuda, i spent a week in detroit at the u.s. social forum. the workshops, cultural events, marches, demonstrations, strategy sessions, formal and informal social networking, and the celebrations! that made up the forum were all incredibly inspired. the week was energized and hopeful in the face of the desolation the city of detroit faces--along with 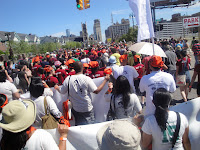 far too many other communities of color. we covered damn near every modern and historical problem marginalized folks have ever encountered. we were almost 20,000 deep. and we were solution-oriented.

the issue-based intellectual work i did at the forum was ultimately not as important to me as the personal work i ended up engaging in. specifically, in addition to all the bonding and deepening of friendships that occurred, i had an emotional (and principled!) conversation that epitomized ideological struggle around the definitions and manifestations of sexism, patriarchy, and male privilege with a male comrade. even though he left the conversation with pretty much the same perspective he had come into it with (that men can be the targets of sexism in a patriarchal society), it was fulfilling for me because of the tedious, exhausting, but committed way! we were able to dialogue with one another.ultimately i think what mattered was the way we were both invested in listening to and understanding one another. i'm positive that the ability to engage in that way--patiently and lovingly--with each other is one of the first steps to building a new society that redefines the way power works.

my journeys have treated me well. and finally, i'm home, with no complaints. but i have a friend who is currently embarking on a road trip from detroit to oakland. from what i understand, his trip thus far has been adventure-heavy and first day of summer sweet. he's been kind enough to keep me updated on his travels and send me the occasional sunset. 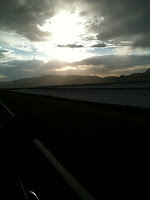 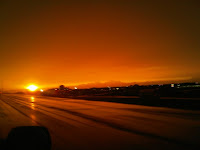 so to him, and to travelers and people everywhere who believe in the power we have to create a new and beautiful world with love and committment, i'm dedicating this poem by harryette mullen:

She wants a man she can just
unfold when she needs him
then fold him up again
like those 50 cent raincoats
women carry in their purses
in case they get caught in stormy weather.

This one has her thumb out
for a man who's going her way.
She'll hitch with him awhile,
let him take her down the road
for a piece.

But I want to take you where you're going,
I'm unfolding for you
like a roadmap you can never again fold up
exactly the same as before.

"one of the best acts of my entire life was to take a sack of oranges to langston hughes when he had the flu, about two weeks before he died".

--alice walker, "duties of the black revolutionary artist," in search of our mother's gardens

last year, i completed an organizing fellowship that, among other things, equipped new paid organizers with practical and time-tested skills central to effective organizing. we learned about various methods of outreach, different styles of doing one-on-ones, various aspects of campaign and leadership development, various methods of centering, and on and on. all of these intensive trainings were always infused with a focus on intentional practice. intentional practice is what we constantly focused on, as distinct from default practice. the difference here is not a shocker: default practices are what we do without thinking--deep-rooted behaviors that we rely on and rarely question--while intentional practices are what we do when we make conscious informed decisions about the way we want to think, act, and engage with the world.


here's an excerpt from an article one of the organizing trainers wrote on practice:

"When we begin to look at our own practices and then practice on purpose, the first thing we want to ask ourselves is: “What matters to me?” “What do I care about? “What am I committed to?” The answers to these questions become the guide for taking on new practices."
--Ng’ethe Maina and Staci Haines
"The Transformative Power of Practice"

so it should come as no surprise that i've been thinking a lot about my personal practices, both the ones already embedded in me as well as the ones i'd like to pick up. in the latter category, i've been making some progress with daily practices of stretching, meditating, and writing. one i'd like to get in the practice of is:

maybe out a window, maybe in the morning, or before i go to bed at night. but there's definitely something affirming and enriching about having feel-good words roll off the tongue. hearing your own voice repeat sounds so well-crafted and enjoyable to say, they make you tingle--creating a new space in the universe filled with positive, aurally incredible speech. that matters to me. a small intentional counter to all of the negative words, music, and sounds i'll likely come into contact with throughout the day.

let's practice! here's a little piece of rbsa from arundhati roy's the god of small things: 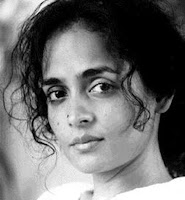 suddenly the skyblue plymouth looked absurdly opulent on the narrow, pitted road. like a wide lady squeezing down a narrow corridor...within minutes, the road was swamped by thousands of marching people. automobile islands in a river of people...the sound of a thousand voices spread over the frozen traffic like a noise umbrella.

yesterday i rode my bike to a birthday dinner for my uncle and upon my arrival, my father realized--much to his dismay-- that i hadn't worn a helmet. today, he sent me the most beautiful email, conceived in concern and executed with love. i've set it up for you below.

as a refresher, poets.org describes "found poetry" in the following way:

"Found poems take existing texts and refashion them, reorder them, and present them as poems. The literary equivalent of a collage, found poetry is often made from newspaper articles, street signs, graffiti, speeches, letters, or even other poems.

A pure found poem consists exclusively of outside texts: the words of the poem remain as they were found, with few additions or omissions. Decisions of form, such as where to break a line, are left to the poet."

zakia, though i know you are grown and can do any darn thing you want to.

you have a responsibility

to stay around as long as you can to share

the awesome gifts you have.

though there is no particular value

in longevity, i think the intensity

of one's sharing of gifts

one has been born with and honed

is what counts. but why chance

for no good reason? surely following

the police around, organizing

and struggling for change

but those are chances worth taking.

riding without a helmet

is just exposing yourself

for no good reason.

welcome to the critically hungry: